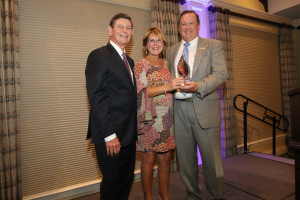 The award is presented by St. Lucie County EDC to a dedicated organization or business leader who has significantly contributed to St. Lucie County’s economy and exemplifies the qualities of a visionary, a trusted role model and leader whose inspiration and achievements impact the quality of job creation, economic vitality and small business growth.

Pete Hegener, the man whose actions inspired this award, was a founding member and integral partner of the EDC, served on the Board of Directors, and was an Executive Committee member.  Pete was a pillar of the St. Lucie County community, having played a key role in the development of western St. Lucie County and what is now Tradition.  Friends and colleagues described him as “honest, visionary, and caring.”  He passed away in March 2012, but his legacy is fondly remembered and recognized through this award.

St. Lucie EDC announced the 3 finalists for the Pete Hegener Leadership Award on April, 12. Michael was recognized at their 4th Annual Leadership Dinner on April 28 at the Harbour Ridge Yacht & Country Club. Past recipients of the Leadership award include:

View photos from the Leadership Dinner that was hosted by St. Lucie County EDC.