Yesterday, the Florida Office of Economics and Demographics Research released the June Revenue Report providing details regarding receipts and distributions to the State’s general revenue fund during the month of June, which reflects May sales tax activity.

Florida’s general revenue fund is the main source of discretionary funding for the State.  This January, the State’s economists estimated that the State would receive $36.2B in general revenue during the State’s fiscal year July 1, 2019 – June 30, 2020.  The State’s fiscal year just finished with an estimated loss for the General Revenue Fund of nearly $1.9 billion, down 5.7% from the expectations held in January when the last forecast was made.

Of this loss, 84.7 percent came from sales tax, which was down 6.1% from the anticipated level. Through March 2020, overall collections posted a gain of $202.4 million to the estimate. Over April, May and June, COVID-19 response and the Governor’s Safer at Home order resulted in a loss of nearly $2.1 billion across all revenue sources. April provided the greatest loss of $878.1M (42.1 percent of the total loss for the quarter), followed consecutively by a May loss of $779.5M (37.4 percent) and June loss of $427.8M (20.5 percent).  Thankfully, the revenue shortfalls have been trending downward as the State continues to reopen.

Sales and Use Tax 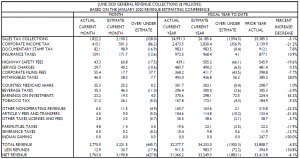 Even though COVID-19 has nearly eliminated the previously projected $2.1B general revenue surplus at the end of the State fiscal year ending June 30th, we still believe Florida’s resilient fiscal policies have put it in a good position to weather this economic storm.  The State appears to be collecting enough revenues to avoid having to dip into the approximately $2.2B in separate reserve funds.  The State also has $4.6B currently available under the CARES Act to use to potentially offset some of the state and local revenue losses directly due to COVID-19.  Future additional federal funding provided under the recently released HEALS Act or another act of Congress would also likely provide additional relief to states, local governments, and schools.