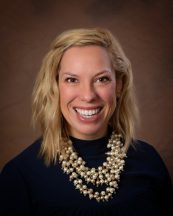 Ms. Ungru offers clients the knowledge and insight she has acquired from serving high-profile roles in the Executive Office of the Governor, the Florida Legislature, and at the highest levels of national and statewide political campaigns. Using her political acumen and an analytical approach, Ms. Ungru helps clients define their objectives, build a cohesive strategy, and overcome challenges that stand between them and their goals. She provides a deep understanding of “the how and the why” of policy and the political process that is results-oriented.

During her career, Ms. Ungru has served in the appointed position of deputy chief of staff for Governor Rick Scott, overseeing nine agencies, including the healthcare and public safety departments, as well as the Departments of State and Management Services. Together, these agencies account for more than 45 percent of the state’s total budget.

In addition, Ms. Ungru was chief of staff for the Agency for Health Care Administration (AHCA), which oversees the state of Florida’s Medicaid program and regulates more than 45,000 healthcare facilities. During her tenure, the agency implemented major health reforms, including the movement to Statewide Medicaid Managed Care, the largest procurement in state history.
Nationally, Ms. Ungru has extensive political experience in 13 states, as well as with the Republican National Committee and National Republican Senatorial Committee. Jennifer was tapped by the DeSantis campaign for Election Day Operations. She then led the recount efforts and strategy for Governor DeSantis. She was then asked to both present to the Transitional Advisory Committee on Government Operations regarding the 2018 elections and recounts, and serve as a member to the Health Care Transition team.

Not admitted to practice