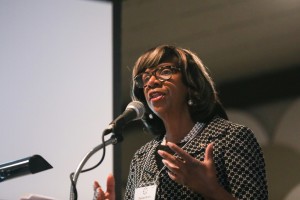 On March 11, 2016, the Eighth Judicial Circuit Bar Association hosted American Bar Association (ABA) President Paulette Brown at this year’s Leadership Roundtable in downtown Gainesville, Florida, to discuss implicit bias in the legal profession. This event culminated over a year of planning by a number of dedicated practitioners in the Eighth Circuit to have President Brown appear in Gainesville to address this important subject.

Over 150 law students and attorneys and nearly two dozen state and federal judges were in attendance, as the ABA’s first African-American woman President engaged the audience with a substantive one-hour presentation that directly stated her, and the American Bar Association’s, strong concern and focus on identifying and implementing remedies for implicit bias. Law Professors Jason Nance and Sara Redfield then led a workshop on the subject and its effect in different contexts, as well as techniques for participants to overcome their own implicit bias.

After a dessert interlude, the group broke into “roundtable” format for further moderated discussion and candid discussion of implicit bias issues that they have observed in the judicial system.

Dean Mead co-sponsored the event financially and assisted President Brown during her visit to Gainesville. The North Central Florida Chapter of the Federal Bar Association was one of several other bar organizations that co-sponsored the event. Dean Mead’s Robert Griscti is President of the FBA Chapter and was with a small group of bar leaders who dined with President Brown the evening before. She explained her extensive travel as ABA President, telling of her intent to visit all 50 states at least once (she has been to Florida numerous times during her presidency), as well as her extensive foreign travel as ABA President, which included a personal meeting with the Queen of England.

Elliott Welker, Dean Mead legal assistant, helped with electronic promotion and event setup and reception of attendees. Law clerk and graduating law student at UF, Jake Huxtable, had the pleasure of personally interacting with President Brown while driving her from Gainesville to the Jacksonville International Airport after the event. “Not only was it a privilege to spend one-on-one time with one of the most influential African-American women in the legal profession, but Ms. Brown was kind enough to give me some invaluable advice on how to be a successful litigator,” said Huxtable, who plans to practice in litigation.

This event is another example of Dean Mead’s leadership in advancing legal ethics, civility and professionalism from each of its offices statewide. The Gainesville office extends its thanks to the firm and those who contributed not only financial resources, but also considerable time and effort to initiate and successfully present this event.