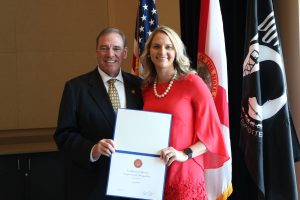 Last week, Angela Bonds received a Congressional Recognition Certificate from U.S. Congressman Neal Dunn for her extraordinary efforts following Hurricane Michael in the Panhandle. Congressman Dunn hosted the Hurricane Heroes luncheon in Tallahassee to honor staff from various organizations who helped relay information to his office in the aftermath of the storm.

Bonds is the Government Affairs Advisor in Dean Mead’s Tallahassee office. She is the former director of legislative affairs for the Florida Division of Emergency Management. In her role at the agency, she assisted with the communication of vital disaster information to members of the Florida House of Representatives and Senate and U.S. Congress, as well as local officials.