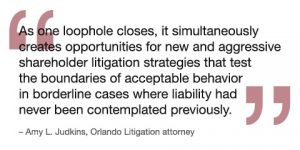 One of the basic tenets of trading securities is that it is unlawful to induce their sale by either the use of false information or the omission of material facts. Essentially, you can’t trick someone into investing in securities.

One of the key concepts here is that of scienter, which is the intent or knowledge of wrongdoing prior to committing an act or making a statement. In the context of securities fraud, this means that if someone knows of a problem that a company is experiencing and then fails to report it, or – conversely – materially misstates the condition of the company and sells stock based on those statements or omissions, there is scienter to commit fraud.

The arbiter of fairness in the trading of securities is the U.S. Securities and Exchange Commission (SEC). Specifically, SEC Rule 10b–5 bans certain deceptive conduct related to the purchase and sale of securities. The rule, which is designed to protect the market from the spread of false and misleading information, breaks down the prohibited conduct into three categories:

A few years ago, in Janus Capital Group, Inc. v. First Derivative Traders, the Supreme Court considered the second of these provisions, Rule 10b–5(b). The Court held that there was liability for the “maker of a statement,” which the Court described as the individual or entity with the final authority over the statement, its content, and if it should be communicated and how.

As Dean Mead attorney Amy Judkins observes, however, the critical question left open by Janus was that of liability for those who do not make, but rather disseminate or pass along false or misleading statements to potential investors with the intent to defraud.

In the recent case of Lorenzo v. Securities and Exchange Commission, the Supreme Court considered this question and held that someone who is not a “maker” of a misstatement under Janus can indeed be found to have violated subsections (a) and (c) of Rule 10b–5 and related provisions of the securities laws. It’s an appropriate ruling, notes Judkins, because it closes a potential loophole that would have allowed brokers and other traders to use misleading investment information by simply channeling it through a third party.

In Lorenzo, the petitioner was the director of investment banking at a registered broker-dealer firm with a single investment-banking client, a waste-management technology company. This client claimed total assets of about $14 million, though much of that figure was based upon a questionable intellectual property valuation. Lorenzo’s firm was retained to sell to investors $15 million worth of debentures based on this representation. Shortly after retaining Lorenzo’s firm, the client publicly disclosed “that its intellectual property was worthless” and that the true value of the company was less than $400,000.

Although Lorenzo was aware of this fact, he nevertheless sent two emails to prospective investors describing the debenture offering. The emails were sent at the direction of his boss, who supplied and approved the messages. These emails falsely promoted the investment, claiming the company had $10 million in “confirmed assets,” and neglected to mention the public disclosure of the company’s actual value. Notably, Lorenzo signed the emails with his own name, identified himself by title as “Vice President – Investment Banking” and invited the recipients to “call with any questions.”

The SEC instituted proceedings and eventually found that Lorenzo violated Rule 10b–5, Section 10(b) of the Exchange Act, as well as Section 17(a)(1) by sending false and misleading statements to investors with the intent to defraud. Lorenzo was fined and barred for life from working in the securities industry. The SEC’s findings were upheld on appeal by the D.C. Circuit Court, with a dissenting opinion filed by then-U.S. Circuit Judge Brett Kavanaugh, who later recused himself from the Supreme Court proceedings.

In a 6-2 ruling, the Supreme Court affirmed the appellate court’s decision, holding that “[b]y sending emails he understood to contain material untruths,” Lorenzo had in fact violated Rule 10b-5 sections (a) and (c). The Court ruled that because he knew that the statements he passed along were false, scienter was not an issue and concluded that “it is difficult to see how his actions could escape the reach of those provisions.”

First, the Court reaffirmed and clarified its holding in Janus. While only the “maker” of a false statement can be primarily liable under Rule 10b-5(b) under Janus, liability under subsections (a) and (c) now properly exists for the dissemination of false or misleading information under Lorenzo. The open-ended question going forward lies with the difficulty in interpreting the scope of liability of borderline cases. Although there was “nothing borderline about this case,” according to the Court, Judkins cautions clients to look for intent and scienter to form the critical battleground issues for litigators and lower courts in future cases.

Second, Judkins expects the Lorenzo decision to lead to a more aggressive stance by the SEC in pursuing the dissemination of false statements under Rule 10b-5(a) and (c). If your company’s offerings and reference materials are not up to date and accurate, it could lead to liability for a broader class of potential targets such as underwriters, analysts and anyone responsible for communicating to investors.

Finally, expect to see an increase in shareholder class actions predicated on an expanded interpretation of scheme liability. Judkins notes, “As one loophole closes, it simultaneously creates opportunities for new and aggressive shareholder litigation strategies that test the boundaries of acceptable behavior in borderline cases where liability had never been contemplated previously.”

Posted in Articles, SEC
Are you interested in learning more about this subject matter? Please fill out this brief form and we will contact you soon.